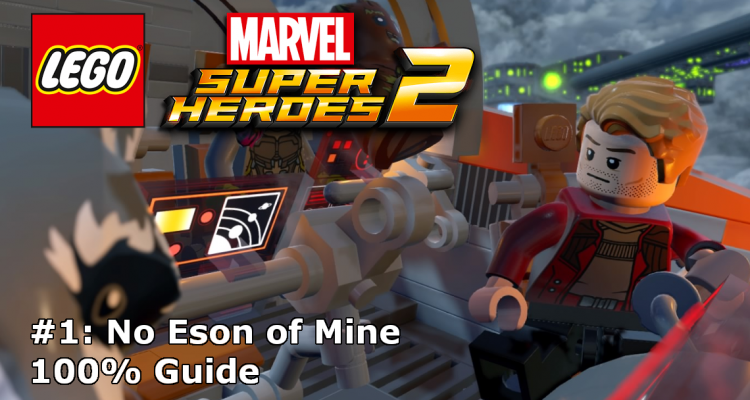 LEGO Marvel Super Heroes 2 – No Eson of Mine Minikits Guide

This video will guide you through LEGO Marvel Super Heroes 2 level 1, No Eson of Mine.

The video will provide you with the locations of all ten minikits as well as Stan Lee in Peril and the hidden character token.

Minikit #1 (00:22):
Right at the start of the level, head to the right of the main table and destroy the two containers against the wall. Doing this will reveal a stack of bricks to build. Once built into a circuit point, smash the large blue box until pieces fall off allowing you to build a connection from the circuit point to the box. Send in a shrinking character and on completion, the blue box will open to reveal a breakable box containing the minikit.

Minikit #2 (02:17):
Further down the corridor on the first part of the ship, there is a mixtape on the right-hand side. Use magic to place it in the player. After a quick dance session, the minikit will appear.

Minikit #3 (02:45):
At the far end of the first part of the ship on the left, there are three coloured lights hanging from the ceiling. Shoot them in the order they flash to get the minikit.

Minikit #4 (03:17):
After you reach the Xandar promenade jump off the edge to the right and you’ll to find multiple shallow pools. Head the pool farthest from the building on fire to find a frozen pipe. Unfreeze it with a laser and turn the valve to release the minikit and a lot of studs as a little bonus.

Minikit #5 (04:14):
In the same area as the previous minikit, there are five water creatures swimming about in the pools. Kill all five for the minikit.

Minikit #6 (04:41):
Off to the right of the previous minikit and there is a yellow crane to operate. Use the crane to bring objects up from the sea and on the third attempt, you’ll bring up a crate containing the minikit.

Minikit #7 (05:44):
After the previous minikit fly or swim south to the edge of the environment and you’ll find a pontoon with a silver egg on it. Destroy the egg for the minikit.

Minikit #8 (06:19):
After Rocket and Groot join the fight, head left and down the ramp stairway. Once halfway, jump down and you should pick up the minikit hidden at ground level.

Minikit #9 (07:17):
During the final battle against Eson, head to the far left of the environment to find a breakable piece of ground that can be shattered by super-strength for the minikit

Minikit #10 (07:34):
About halfway through Eson battle head to the far right and destroy the debris to reveal a launch pad that will spring you into the air for the minikit.

Stan Lee In Peril (06:39):
From minikit #8 head left and Stan can be found stuck inside a crashed escape pod. Use a character like Black Bolt to shatter the cockpit glass and release him.

Hidden Character Token (05:59):
At the bottom of the building on fire, there is a golden wall which can be lasered to reveal the character token.