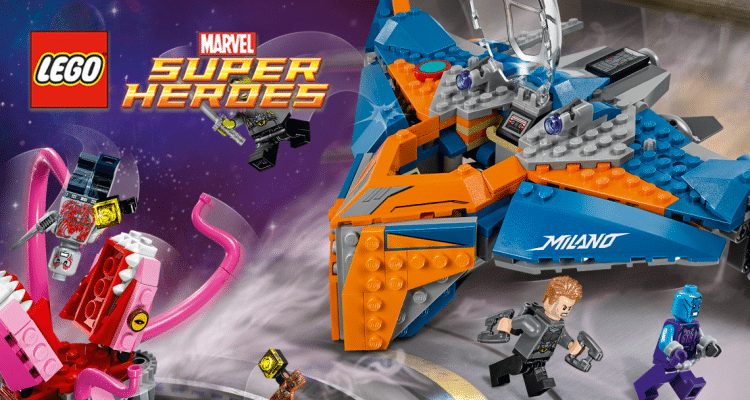 In case you’ve somehow missed it, Guardians Of The Galaxy, the surprise Marvel hit from 2014, has a sequel coming out in just a few short months.

The ragtag crew of the Milano is set to return for Volume 2 of their awesome mixtape and in addition to another superbly tantalising trailer released in the early hours of this morning, everyone’s favourite construction toy company, LEGO, has released a wave of new movie tie-in sets under their LEGO Marvel Super Heroes banner.

Featuring all of the major characters from the movie, here’s a rundown of what’s available from today:

Prepare to fire the six-stud shooter at Taserface’s M-ship! Rocket and Mantis might have crash landed on the forest planet, but they’ve built a powerful weapon from the Milano’s wreckage to fend off the Ravagers. Take cover from the M-ship’s stud shooters in the forest, then launch a counter-attack with Rocket’s guns in this new and epic Guardians of the Galaxy adventure! Includes three minifigures: Mantis, Rocket and Taserface.

Stage a cosmic battle with this action-packed Guardians of the Galaxy set featuring Ayesha’s Golden Drone spaceship with two stud shooters and Yondu’s Laser Drill spaceship with a spring-loaded missile, sliding minifigure cockpit and opening side panels. Includes three minifigures: Yondu, Star-Lord and Ayesha, plus a Groot figure in his Ravager suit.

Help Star-Lord, Gamora, Drax and Groot battle the Abilisk monster as they search for the Annulax batteries. Fire the Milano’s stud shooters and release the bombs to weaken the beast, then zoom Star-Lord in with his blasters to take the energy source, but watch out for its thrashing tentacles and chomping mouth! Includes four minifigures: Star-Lord, Gamora, Nebula and Drax, plus a Groot figure.

For more information head over to the LEGO Marvel Super Heroes homepage.