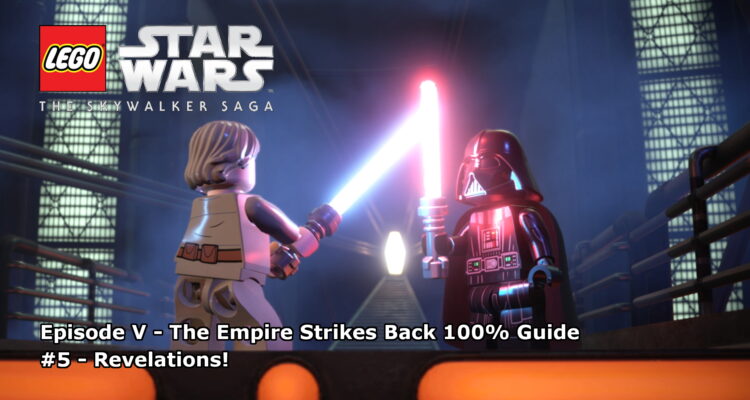 This guide will show you how to achieve 100% completion on LEGO Star Wars: The Skywalker Saga – Episode V: The Empire Strikes Back Level 5, Revelations!.

Challenge #1: Force Feedback
You’ll battle Darth Vader in three different locations in this level. During the battles, use Force Throw three objects at him. The type of object is irrelevant, as long as the object hits Vader.

Challenge #2: Most Impressive
Complete the level in under 10 minutes.

Challenge #3: Ugnaught-y
This challenge requires you to find all of the hidden Ugnaughts throughout the level, there are three groups to find.

Minikit #1:
After defeating Darth Vader for the first time, use the switch in the lower level of  Carbonite Freezing Room. This will unfreeze a minikit to collect.

Minikit #2:
Go through the first vent into the room between vents. Before moving on, enter the center vent that Darth Vader blocked previously and use a grapple hook to retrieve the minikit.

Minikit #3:
Slide down the vent and enter the second Vader encounter room. On the left as you enter, use the Protocol Terminal. Use the single button twice and a minikit will rise up out of the console in the centre of the room.

Minikit #4:
After getting thrown out of the second Darth Vader battle room, the minikit can be found by activating the Rebel Terminal to the left of the smashed window.

Minikit #5:
In the hallway before the big final confrontation with Vader, there are multiple rooms with doors. Enter the first door on the right to find Lando’s cape room. Break the portrait of Lando to find this minikit.