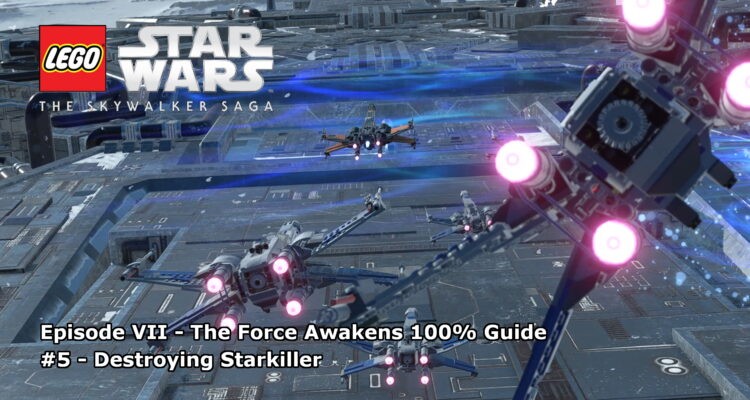 This guide will show you how to achieve 100% completion on LEGO Star Wars: The Skywalker Saga – Episode VII: The Force Awakens Level 5, Destroying Starkiller.

Challenge #1: Heck of a Pilot!
Similar to previous levels involving ships, this challenge requires you to avoid three enemy lock-ons. As soon as the prompt appears, press the correct buttons to dodge. You don’t have to do it three times in a row.

Challenge #2: Keeping a Cool Head
Snowtroopers will appear between battles with Kylo Ren. The challenge simply requires you to shoot the helmets off of five of them. Aim for the head with a blaster, it’s that simple.

Challenge #3: Snow Joke
During the second encounter with Kylo Ren, swap to Rey and start breaking snow blocks. A pile of snow is located to the back-left after dropping into the area. Build it up the remaining pieces into a snowman and then use to force to push it into Ren to complete this challenge.

Minikit #1:
During the trench run, destroy 10 turrets on the sides of the trench for the minikit.

Minikit #2:
In the trench run, look for a minikit in the lower-right corner of the trench. Shoot it, or fly through it, for retrieve it.

Minikit #3:
Reach the second Kylo Ren forest arena. After the TIE crashes, don’t climb over it. Instead head right to find a minikit floating in the air. Use the force to stack the containers in the area so that you can reach the minikit.

Minikit #4:
The last minikit is on the large rock that forks your path leading to Kylo Ren’s final area. After climbing up the TIE wing ramp, follow the right path and look left for a path up into the rock.

Minikit #5:
On the path to the final Kylo Ren arena, there’s a cracked blue wall on the right side. Break it open with the Scavenger’s Breaker Blaster to find the minikit.