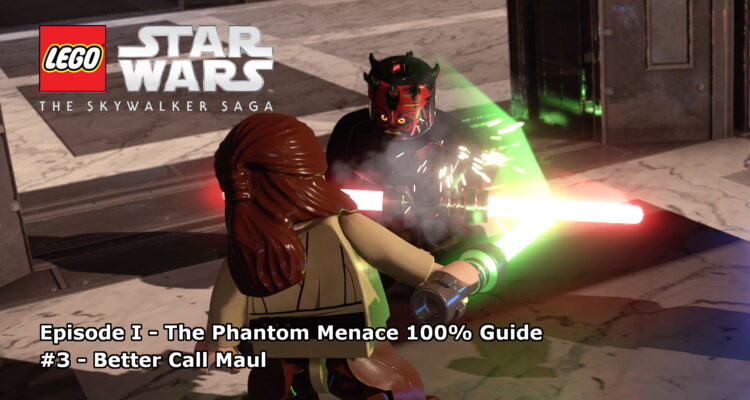 This guide will show you how to achieve 100% completion on LEGO Star Wars: The Skywalker Saga – Episode I: The Phantom Menace Level 3, Better Call Maul.

Challenge #2: Forced Out
As soon as the large group of battle droids appear, force push 5 droids over the walkway. There’s a number of groups of droids throughout the level and they don’t all need to be done at once.

Challenge #3: Odds Stacked in Your Favour
Once Maul tears up the walkway and creates a gap in the path, force move the crates to your right to bridge the gap.

Minikit #1:
At the start of the level, complete the first battle with Maul and, once he’s moved away, turn around and walk toward the entrance door. On the left, there’s a minikit you can reach by using the force on the platforms to lower them.

Minikit #2:
There are five black cleaning droids in the area that need to be destroyed to collect the minikit:

Minikit #3:
After Maul destroys the bridge, take the right lift up and continue to far back right walkway. Once you find the platform, destroy everything and build the bricks into four red buttons. Use Jedi powers to move two LEGO crates onto two of the red buttons. Then you can use two regular characters to get the lift flying upward to reach this kit.

Minikit #4:
After the third Darth Maul battle, use Force powers on the LEGO floor platform before entering the red forcefield hallway. This reveals an orange LEGO hook handle. Pull the handle too reveal a hidden minikit.

Minikit #5:
At the final battle against Darth Maul, drop into the central vent to grab the minikit.