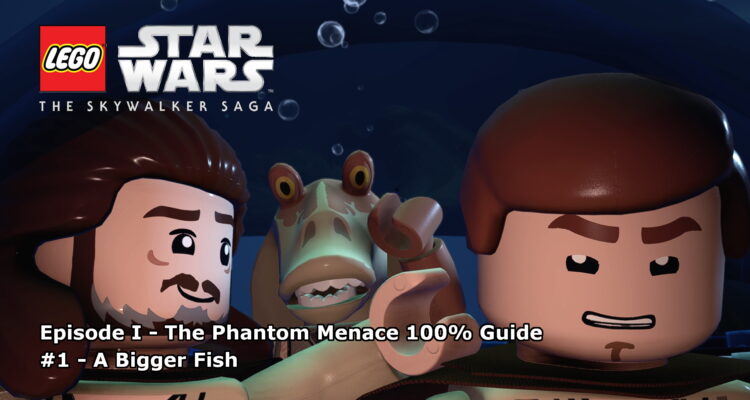 This guide will show you how to achieve 100% completion on LEGO Star Wars: The Skywalker Saga – Episode I: The Phantom Menace Level 1, A Bigger Fish.

Challenge #1: Dis is Nutsen
For this challenge, simply dodge 3 of the Opee Sea Killer’s attacks (the first fish that attacks you) in a row. A prompt appears on-screen when to dodge so simply hit the right button when prompted three times for the challenge.

Challenge #2: Dodge Every-fin
This challenge requires you to defeat the Opee Sea Killer without taking damage. A combination of dodging using the above method, plus shooting and you should easier complete this challenge.

Challenge #3: Colo Snore Fish
Much like the first challenge, this challenge requires you to dodge the fish attacks three times in a row. With the second battle, follow the same method as the first.

Minikit #1:
During the initial fish battle a minikit will appear on the right. Shoot it to collect.

Minikit #2:
The next minikit will appear on the left side of the screen. Be sure not to defeat the fish until the minikit has been collected.

Minikit #3:
Same as the previous two minikits, but this time on the right of the screen.

Minikit #4:
During the Colo Claw Fish sequence, a minikit will appear on the left side. Shoot it to collect.

Minikit #5:
The final minikit will appear near the end through the second fish battle on the right.