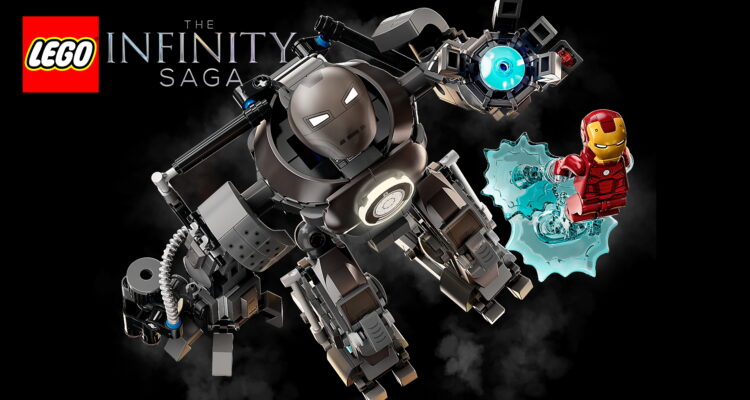 With twenty-three movies and counting, the Marvel Cinematic Universe is a wealth of source material for the picking, and despite some amazing sets over the past decade inspired by the shared universe, many iconic moments have yet to be adapted. As part of a new sub-theme entitled “The Infinity Saga”, LEGO is paying homage to the MCU’s legacy with retrospective sets from it’s 13-year history.

LEGO’s first dip into the MCU pond came in 2012 alongside the release of the first Avengers movie, and as such, LEGO Marvel fans have missed out on tie-in sets for most of the phase 1 movies, the origin movies for the core characters who have shaped the cinematic universe. It’s because of this that my interest was piqued when I saw that an Iron Monger set was releasing.

Despite an epic-looking Infinity Gauntlet, a set inspired by the final battle in Endgame, and a brand new version of the Guardian’s ship The Benatar, Iron Man’s latest set, a mid-price range set, was my first purchase in the Infinity Saga collection. Iron Man, the movie that started it all and one that still holds up as one of the best in the series, finally has a dedicated set featuring the first MCU villain, what’s not to get excited about?

Featuring three exclusive minifigures based on the movie, the set includes the Mark 3 Iron Man, a suited Pepper Potts variant, and the jewel of the set in terms of exclusivity is Obadiah Stane, the Iron Monger himself. That’s three key Marvel characters, as a collector, that’s enough for me to want this set. 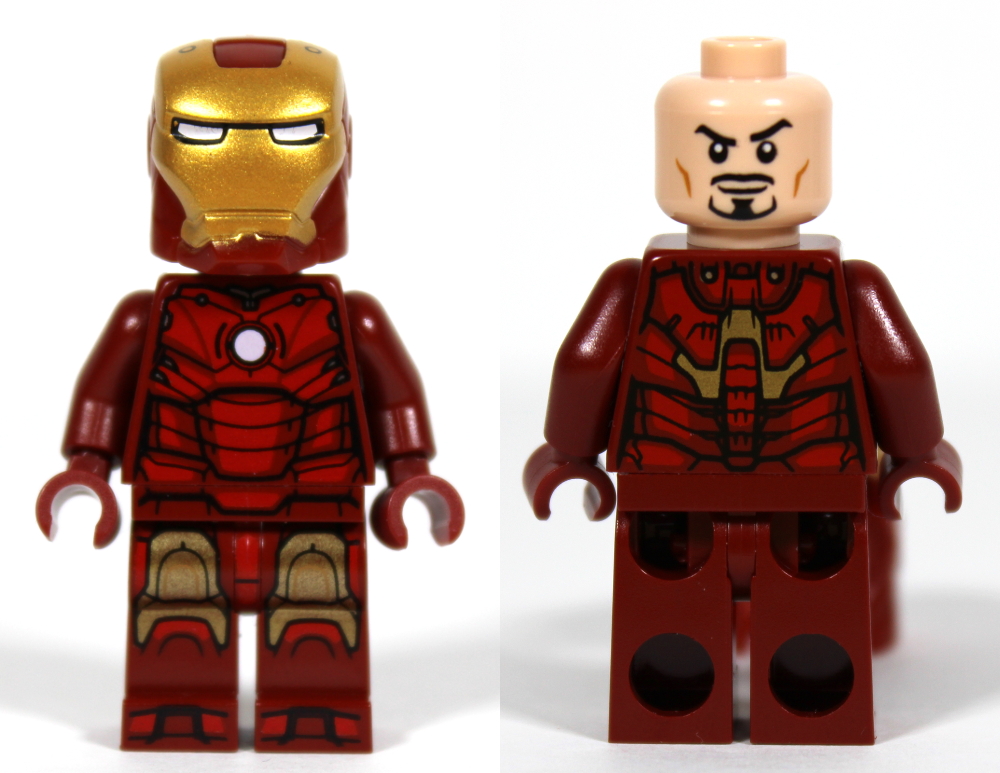 Over the past decade, the MCU Iron Man minifigures have evolved quite a bit, with more and more subtle detail integrated into the printing and so the Mark 3 suit, the first of Tony Stark’s red and gold armours, is exceptionally detailed from top to toe. With recent sets such as the Hall of Armour and other more comic-book inspired Iron Man sets opting for the one-piece helmets, it great to see the return of the hinged design which can be opened to reveal Tony’s face. As the minifigures feature the additional Jarvis interface printing on the head-piece, it seems like such a waste when you can’t see it without removing the helmet, that’s rectified here, however. What is a nice touch here, is the additional printing on the top of the helmet showing joining rivets, something that features on the actual suit and demonstrates how early in Iron Man’s story this is.

Much like it’s movie counterpart, the torso has no gold in the design, instead featuring a layered red armour design with circular arc reactor. There are some very subtle metallic lines on either side of the chest, again following the movie design, they’re barely noticeable and yet their inclusion shows how much effort has gone into making this as accurate as possible. Sadly, however, the arms don’t have any printing and so we miss out on the gold aspects of the source material there. The back of the torso perfectly captures the layer connection plates we see in the movie as Tony suits up for the first time, with more subtle rivets at the neckline. The legs print is also unique to the minifigure, less detail than we’ve seen in other MCU Iron Man figs, but movie accurate with gold plating printing accentuating the boot-like red lower half.

As MCU Iron Man figures go, with the exception of the arms, this is impressively movie accurate. 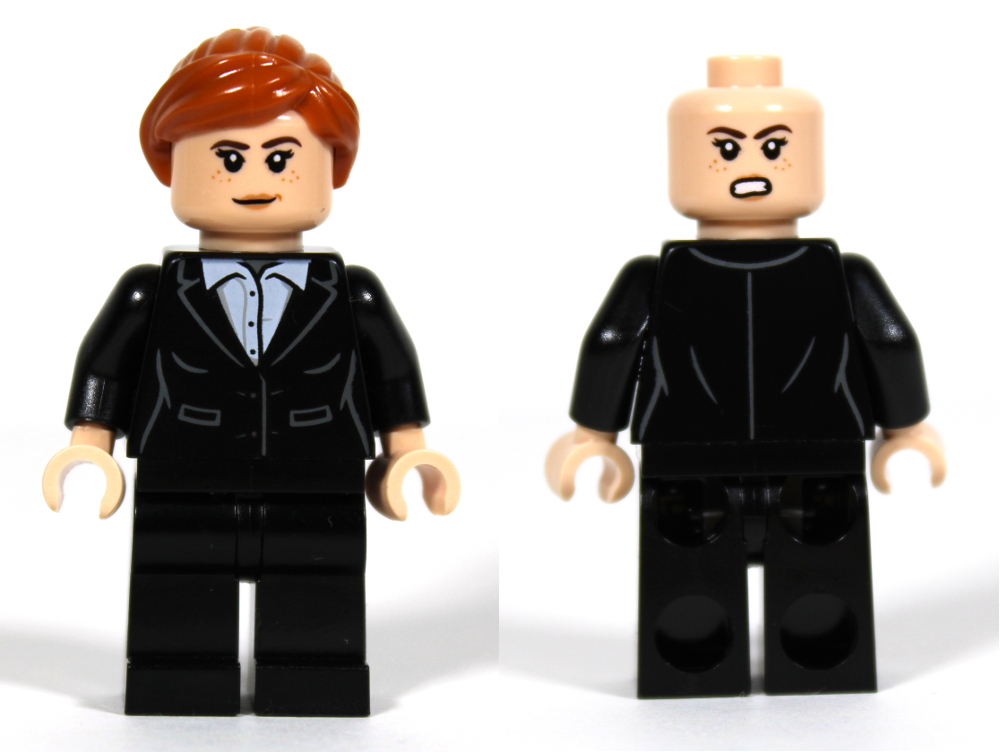 Pepper Potts has seen life as a minifigure previously, with an Iron Man 3 tie-in set seeing the character in brick form as well as her Rescue suit making it into one of the Endgame sets. This new variant is significantly different from both of those versions, however. Donning the black suit she is wearing early in the movie, this minifigure again feature movie accurate printing on the torso with black suit, white shirt and the standard female outlines. As one would expect, the legs are simple black with no printing. The great thing about this minifigure’s outfit is that it’s pretty generic and so works really well should you wish to suit up one of your other female characters with ease.

The head-piece and hair for the minifigure matches those used for the previous variants, the hair from Iron Man 3, the dual face printings from Endgame’s Rescue. 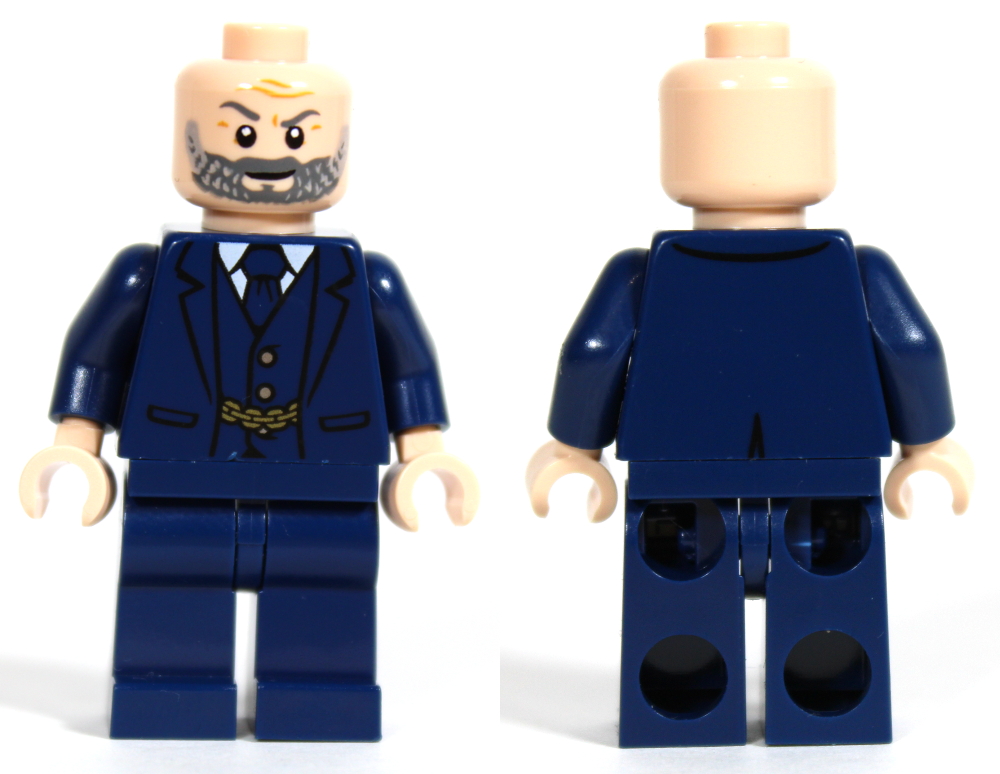 The prize minifigure in the collection is Obadiah Stane and his minifigure debut is simple, yet perfect. Interestingly, the three-piece blue suit the figure is outfitted in appears to be based more on the comic-book character or possibly the Forbes magazine cover we see early on in the movie, because watching the movie end to end, I couldn’t find any point he sported a suit like this (though happy to be corrected). It’s not the end of the world, the design is modelled on the character and very much suits what we’d expect him to be wearing, a perfect three-piece suit, complete with tie and pocket watch chain, it’s immaculate.

Given the sets price-point, you cannot complain with three named characters in the minifigure collection, each a unique variant exclusive to this set. 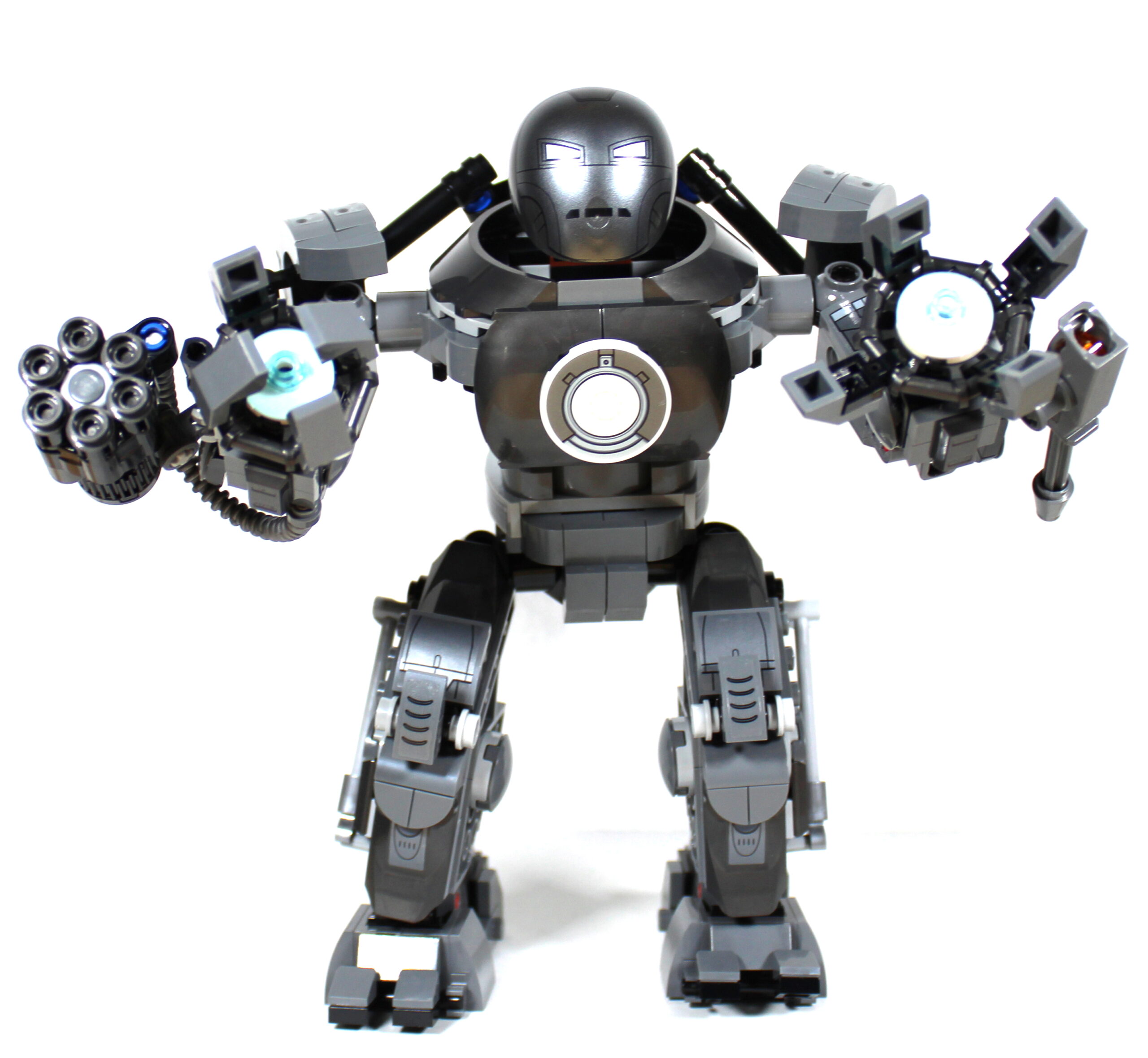 We’ve all seen enough Hulk Busters and Marvel Mechs now from LEGO to know what makes a great build in this genre. I myself already own three Hulk Busters, the War Machine buster, Igor, and every mech released in the last two years. Adding another one to the collection might seem a little frivolous at this point, and yet there is something truly special about the Iron Monger that sets it apart from the rest.

The build itself is a casual 60-90 mins worth, about the same as other similar builds, and yet not one of the 470+ pieces goes to waste in the model, it is exceptionally detailed from head to toe and, quite frankly, about as movie accurate as a LEGO version could possibly be. I wont delve too deeply into the build process, purely because there isn’t that much unique about it, if you’ve built a Hulk buster or any LEGO mechs then you should be fairly familiar with it. It’s the details I want to focus on. 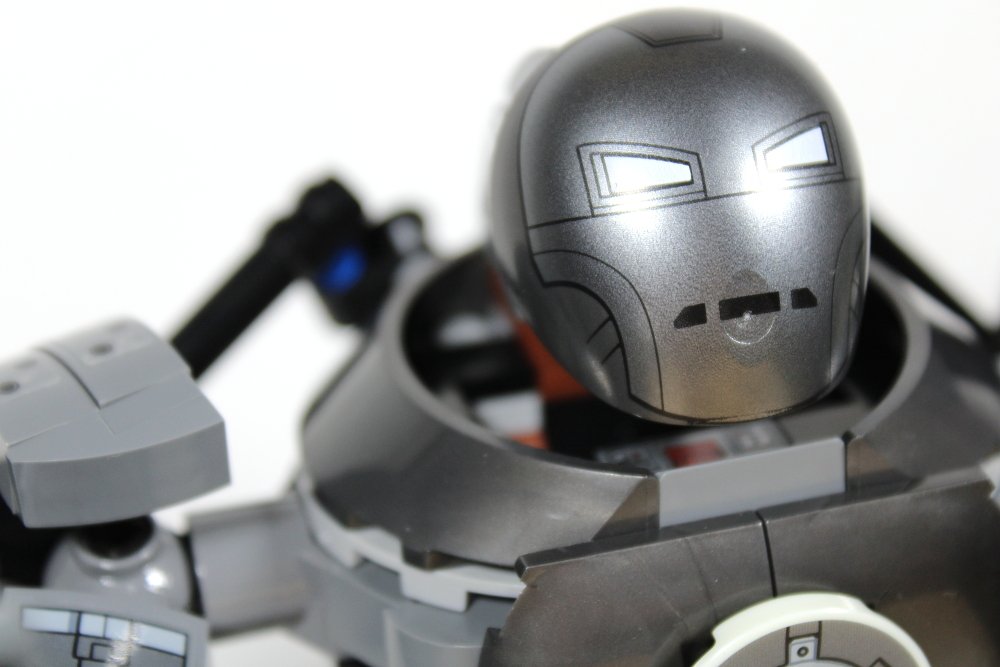 Much like the Hulk Busters, the large helmet piece is a pre-printed piece, though rather than clipping directly on to the model it has two pin connections, similar to those used on the large Star Wars buildable figure sub-theme from a few years back. This allows for a large custom built hinge to be connected which pushes the metal face more forward and vertical compared to Stark’s buster, somehow gifting the top half a more aggressive and bulky look.

The helmet piece is, however, one of only two pre-printed pieces, with the other being the control panel inside the cockpit. The rest of the additional fine detail is provided by stickers. I’ve never been much of a fan of stickers on LEGO sets, and especially not the transparent ones – you have one chance to get it right or the sticker is ruined beyond repair – but, with the exception of one, are small enough not to overpower the raw look of the bricked elements. 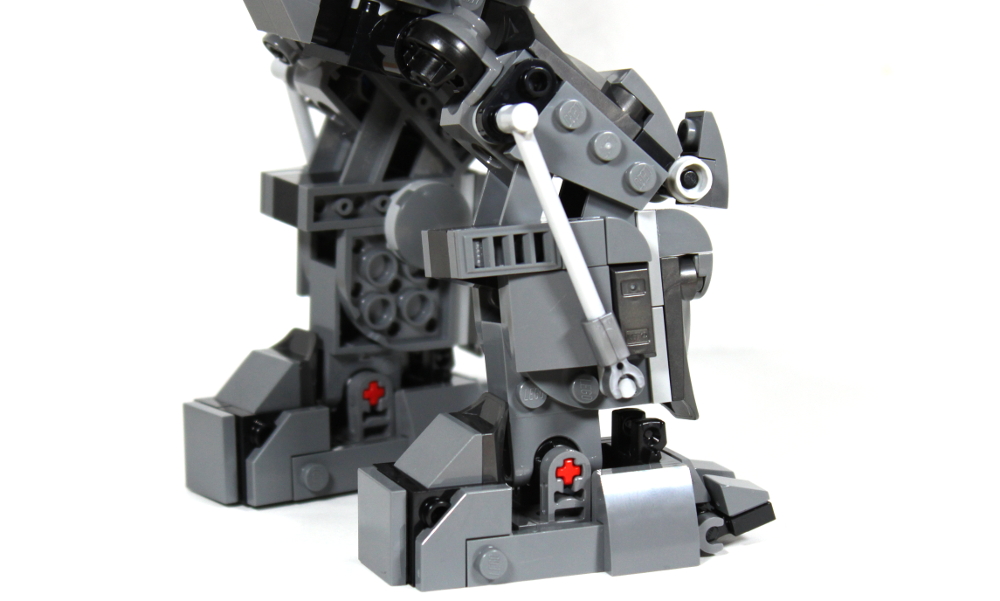 The exception to this is the massive arc reactor on the chest as this circular piece is stickered and lining this up perfectly will make all the difference to the finished model. What is an interesting design choice is that the circular tile the sticker sits on is glow-in-the-dark, a subtle, but ingenious decision. The cockpit area is much more open and larger than the Hulk buster’s and has exposed studs inside so that Stane can be secured into the Iron Monger. 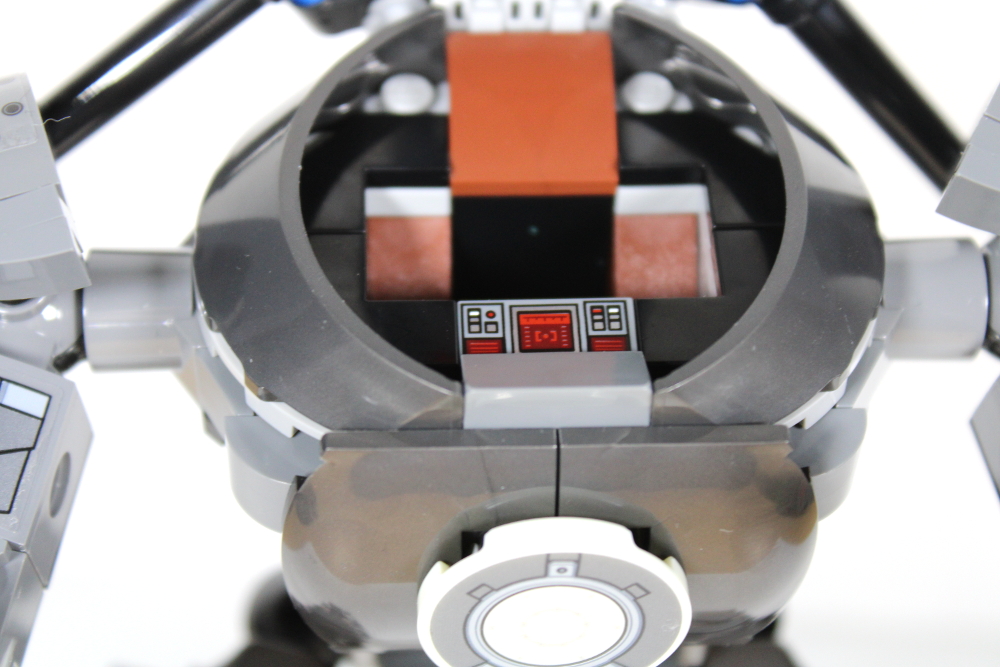 The limbs, for the most part are symmetrical, the legs being identical mirror images of one another. The only deviation comes in the lower halves of the two arms and whilst both feature large blue disruptors, using transparent blue circular pieces, each arm features a different type of working stud shooter. The right arm features the more common rotating 6-stud shooter which can be fired by rotating the back, very effective weapon against anything Iron Man can throw your way. On the left arm, you’ll find a push circular tile stud shoot, capable of pinging out three studs. Both of the weapons work effectively to give Iron Monger a great interactivity for play. You also get a crate to store your spare ammo. 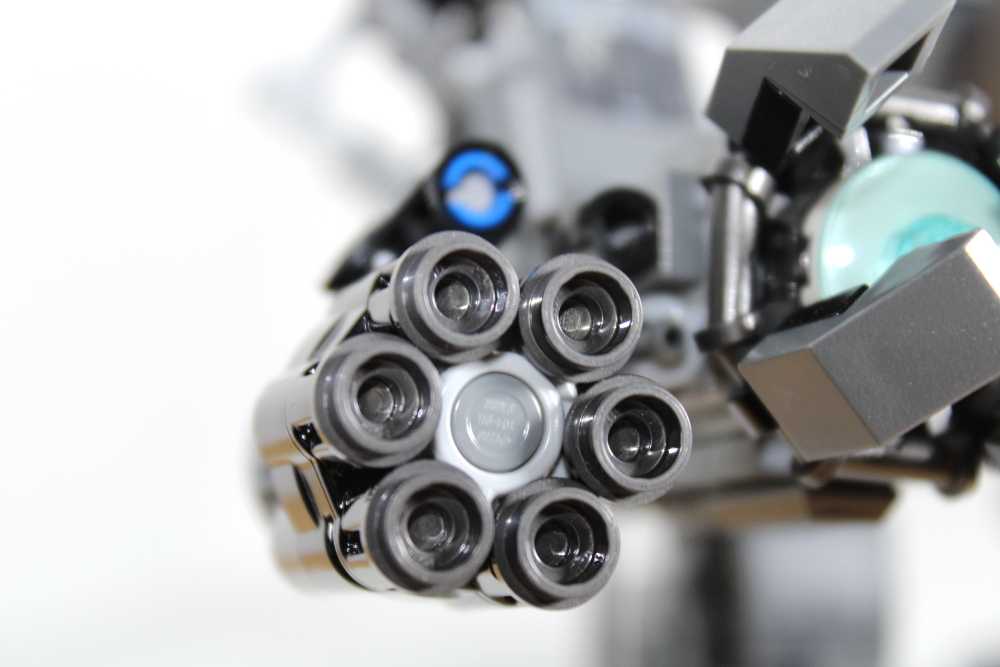 With the play side of this, I’ve always found the Hulk Buster builds to be a bit flimsy and not capable of vigorous play with the younger members of the family before pieces start falling off. With the Iron Monger, with the exception of the shoulder plates which are help on with a couple of weak clips, the rest of the model feel much more sturdy, much more well constructed. 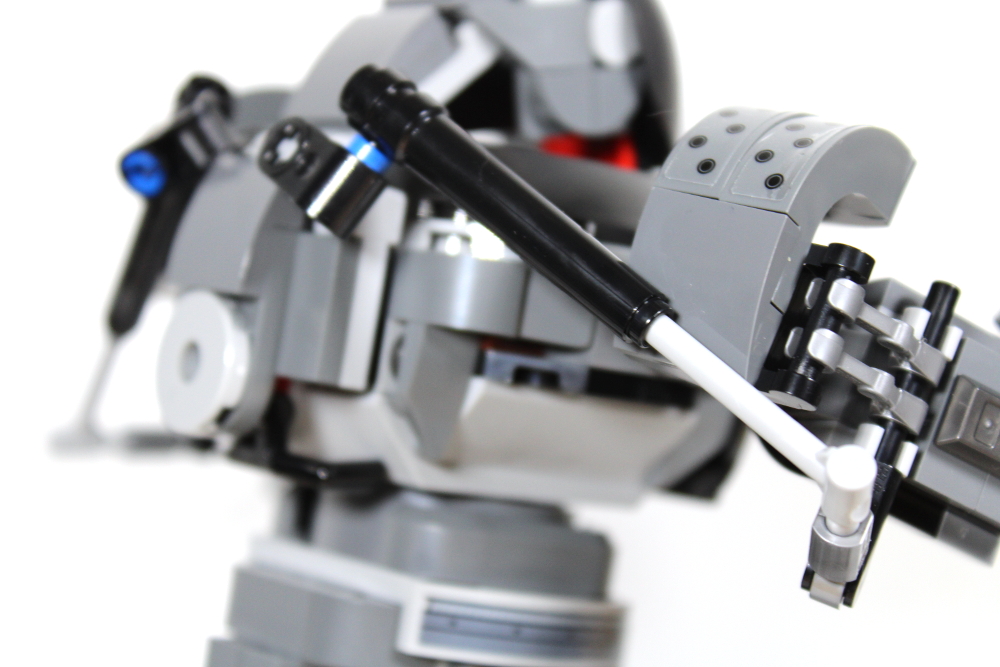 This is down to the source material accurate rods on the back which connect should to elbow. These rods definitely strengthen the construction, though they do limit movement, well, not so much limit, more make it more difficult to pose the arms. It’s a small sacrifice, however, for something that not only is more movie accurate in design, but a better, more sturdy build. 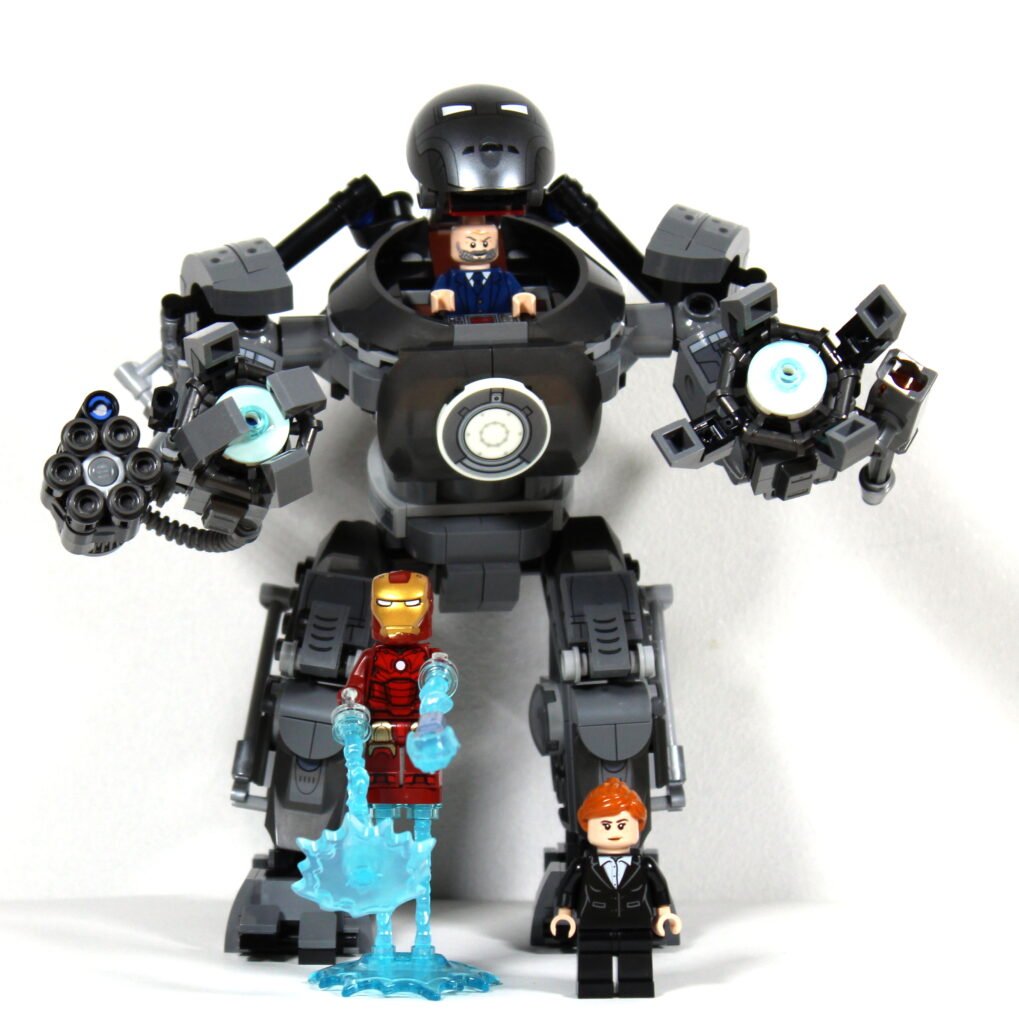 I’ve been waiting for an Iron Monger set since LEGO started their MCU tie-in sub-theme, and despite waiting nearly a decade, I am not disappointed. The Iron Monger suit is beautifully recreated in LEGO form, and about as movie accurate as is possible in brick at this scale.

A lot of love for the movie has gone into the design and it is clear that the designer has done absolutely everything that can be done to bring as much detail from the MCU to this model. The stickers are a pain, but a necessity, more than made up for by the tiny bricked details included.

Minifigure-wise, this is a gold mine for any Marvel collector, with the Mark III finally arriving as well as one of the stronger early MCU villains in Obadiah Stane. Pepper’s minifigure is not only a great addition, but also works as a generic torso that can be used elsewhere – there really aren’t enough LEGO female characters in a power suit.

Overall, the Iron Monger will now sit top of my list for Marvel mech’s of it’s size, it’s fantastically unique is a sub-genre oversaturated with Hulk busters that all look alike.