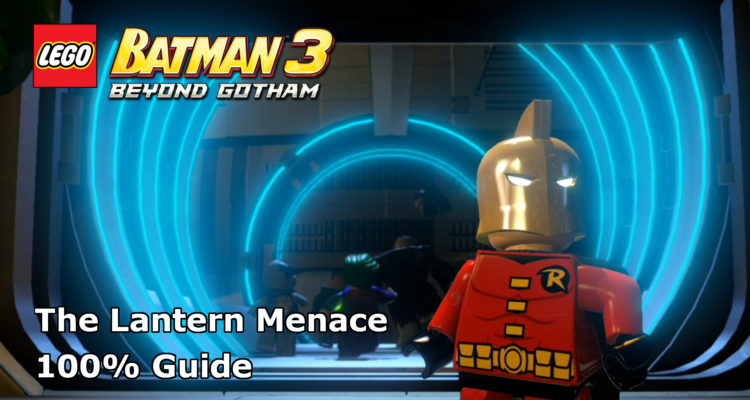 This guide will show you how to achieve 100% completion on LEGO Batman 3: Beyond Gotham Level 6, The Lantern Menace.

Minikit #1 (01:33):
After deactivating both of the security switches, the skull’s mouth will close and reveal magnetic teeth. Use a magnetic powered character to pull the teeth away and reach the minikit.

Minikit #2 (02:02):
After you make it through the electric tentacles, there is a large purple computer at the start of the new area. Destroy it to reveal a tech terminal. Use the terminal to lower a gold castle inside of a glass case. Shattered the glass and destroy the castle for the minikit.

Minikit #3 (03:02):
At the base of the giant skull you’ll find a Martian Manhunter point. Use the teleport and you’ll retrieve the minikit on the other side.

Minikit #4 (03:50):
In the next area, head to the far right to find an investigation point. Use a sensory character to reveal the super-strong handles on the container. Rip the container open for the minikit.

Minikit #5 (04:08):
From the previous minikit, head around to the silver-bricked side and blow it up for the minikit.

Minikit #6 (06:28):
There are five mini Brainiac ships to destroy in the next section for the minikit:

Minikit #7 (06:57):
In the same area you find the last three mini Brainiac ships, head to the lower right and shatter the glass container. You’ll be able to build the minikit from the remaining bricks.

Minikit #8 (07:28):
Next, head over to the left side and again shatter the glass container. This time use a sensory character to reveal a dig spot for the minikit.

Minikit #9 (07:54):
In the final part of the level, there are five hanging objects in the background to destroy. Blow them all up for the minikit.

Minikit #10 (08:49):
As you’re falling to Earth, get a big-fig character and stay in the middle, you should pick up the minikit we ease.

Adam West in Peril (00:16):
At the very beginning of the level, head left and destroy the plants to reveal a dig spot. Dig up the bricks to build a turning switch and save Adam West.

Character Token #1 (03:21):
In the large area are the base of the giant skull, destroy everything in the middle of the area to reveal a Flash panel. Use the speedster and highlight four objects in front of you to build a giant screen. Next, use a sensory character on the investigation point in front of the Flash panel. Finally, use a magnetic character to tune the large screen to retrieve the token.

Character Token #2 (04:42):
In the section of the level with the large electrified floor puzzle you’ll find Bat-Mite. After speaking with him head into the next section and use a sensory character on the investigation point in front of you as you end the room. This will reveal an X-Ray point which you can use to retrieve the item Bat-Mite wants. Return to him for the token.

Character Token #3 (08:41):
In the final area, jump behind Brianiac’s throne for the token.

Red Brick ():
At the start of the level, head left and in the back left corner there is a magnetic pip. Pull it apart to release bricks to build the Plastic-Man point. Use it and Plastic-Man will plow into some bricks on the other side of room. Rebuilt them and inflate the red brick to retrieve it.