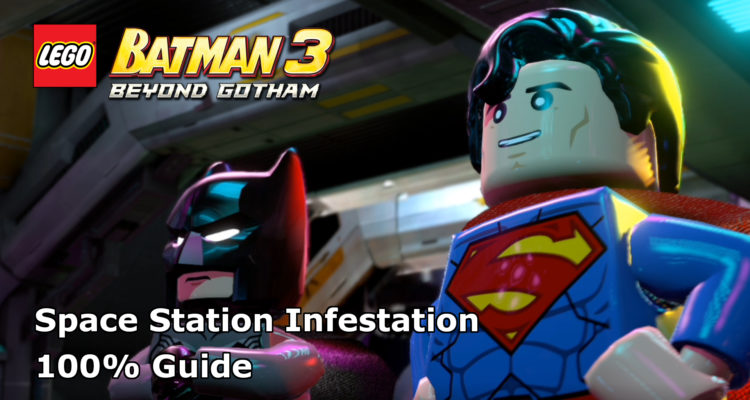 This guide will show you how to achieve 100% completion on LEGO Batman 3: Beyond Gotham Level 4, Space Station Infestation.

Minikit #1 (00:54):
From the start of the level, that are six balloons with crates attached to destroy. To get the final ones, you will need to put out part of the fire on the left when fighting Tigress:

Minikit #2 (01:38):
Once you’re in the back of the control room, on the far right there is a Robin drone point. Use it to send a drone outside to retrieve the minikit.

Minikit #3 (02:02):
Once you’re in the back of the control room, on the far left there is a tech terminal to use. Use it and the minikit will drop from above.

Minikit #4 (02:19):
In the next section of the level, head up the steps on the right. Use a character with magnetic powers to open the chest and find the minikit.

Minikit #5 (02:34):
From the previous minikit, head straight behind you and use mind control of the character to open the door. Next, head in and destroy the golden vent for the minikit.

Minikit #7 (03:26):
On the left side of the large open area, floating up near the ceiling you’ll find a minikit.

Minikit #8 (05:47):
In the final area of the level when you take on the Joker, head towards the front of the screen and down to a lower level with the tech terminal outside a door. Use the terminal to open the door and retrieve the minikit.

Minikit #9 (06:04):
To the left of the previous minikit, there is a large magnetic panel that can be opened to gain access to the minikit.

Minikit #10 (06:22):
On the far right, there is a tech terminal hidden by a jack-in-a-box. Use it to open a small hatch, exposing a golden box. Destroy it for the minikit.

Adam West in Peril (06:58):
In the final area of the level, on the left side near where you begin, there is a Plastic-Man vent to climb down. This will bring you out of the other side of the shield next to two blue crates. Destroy the crates and build the Lantern point in order to save Adam.

Character Token #1 (00:16):
At the very beginning of the level, head left to find a magnetic panel on the wall. Pull it open for the token.

Character Token #2 (03:35):
In the large area where you fight Grundy and Killer Croc, fly up to the far left upper platform to find Bat-mite. The item he wants can be found by powering up a generator on the ground floor at the back of the room. Return it to him to retrieve the token.

Character Token #3 (05:07):
In the same area as the previous token, head to the upper level on the far right and find a rocket that can be shrunk by Brainiac. The token will appear once this has been shrunk.

Red Brick (07:46):
In the final area, use the same Plastic-Man vent as you would to find Adam West, and head around the back of the area to the far right. Use Batman to sneak past the camera and deactivate it. Once deactivated, use the Plastic-Man point.