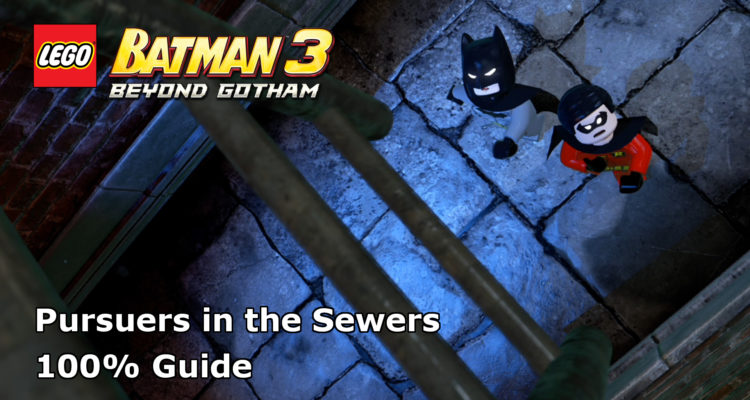 Lego Batman 3: Beyond Gotham – Pursuers in the Sewers 100% Guide

This guide will show you how to achieve 100% completion on LEGO Batman 3: Beyond Gotham Level 1, Pursuers in the Sewers.

Minikit #1 (00:45):
There are five golden toilets to destroy across the first part of the level:

Minikit #2 (02:27):
On the upper level with the switches to turn off the flames, there is a golden value. Destroy it and then use the magnetic valve next to it to release water and put out the fire so that you can get the minikit.

Minikit #3 (03:10):
At the beginning of the level, collect all of the rubbish for Robin’s collector machine and after you’ve used it for the large gun, use it again for the minikit.

Minikit #4 (06:08):
In the section after the train, head up to the upper level and use mind control on the character there. Get the mind-controlled character to head right and collect the minikit.

Minikit #5 (08:24):
In the boss part of the level head to the far right to find a large magnetic valve. Blow it open and head into the gap left behind. In the new area you’ll find a golden wall with the minikit behind.

Minikit #6 (08:50):
In the same area as the previous minikit, there is a Grundy dig spot. Use it to dig up a silver capsule which can be blown up for the minikit.

Minikit #7 (09:26):
In the same area as the previous minikit, on the other side of the room, there is a puzzle which requires you to move a magnetic ball from one side to the other. Complete the puzzle for the minikit.

Minikit #9 (10:06):
Behind Killer Croc there are four golden pipes. Destroy them all for the minikit.

Minikit #10 (10:26):
On the far left of the Killer Croc area there is a pipe with a silver brick seal on it. Blow it up to collect the minikit.

Adam West in Peril (01:46):
In the first part of the level, head to the far right of the area to find Adam sat on a little island being circled by a shark. On the level above him, there is a Grundy dig spot to use which brings up a large tank of shark repellent. Jump on top of the tank to release the repellent and save Adam.

Character Token #1 (00:16):
At the very beginning of the level jump into the water at the front of the area. Jump in the duck boat and destroy the smaller ducks. There are four to destroy for the character token.

Character Token #2 (07:15):
At the beginning of the boss area, there is a puddle of water to freeze for the character token.

Character Token #3 (07:35):
At the beginning of the boss area, have a chat with Bat-mite. Next head to the far right to find a large magnetic valve. Blow it open and head into the gap left behind. Inside, there is a magnetic door on an old washing machine that will give you the item for Bat-Mite. Head back to him for the character token.

Red Brick (06:32):
At the end of the first part of the level, fly up to the upper level above the exit to find the Plastic-Man point.