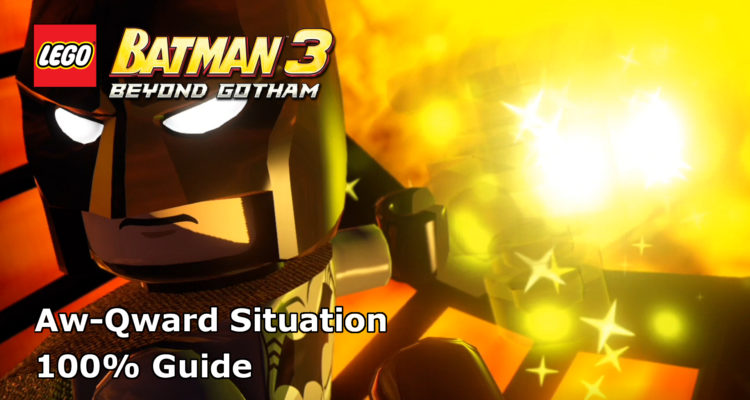 This guide will show you how to achieve 100% completion on LEGO Batman 3: Beyond Gotham Level 14, Aw-Qward Situation.

Minikit #1 (00:16):
When flying around the giant yellow lantern at the start of the level, look for five floating rocks. Shoot them all for the minikit.

Minikit #2 (00:58):
Also during the flying section, look for a stationary metal object. Shoot it down with a missile for the minikit.

Minikit #3 (01:03):
As soon as you begin the land-based section of the level, you’ll see a tech terminal nearby. Use it to spawn some loose bricks which you can build into a Flash Build pad. Use a speedy character to assemble a crane that pulls a minikit out of the lava.

Minikit #4 (01:33):
In the same area, carry on to the next piece of land and look for a rock with a tiny hole. Use the Atom to shrink down and enter. The minikit is hidden below.

Minikit #5 (01:59):
Keep heading down the story path until you reach the end and have to turn right. There you’ll find several dirt spots. Use them all and then use the loose bricks to construct a dinosaur skull. It’ll spawn the minikit in its mouth.

Minikit #6 (03:12):
When you reach the point of in the level where you switch off the conveyor belt, fly down and under the final section of the belt for the minikit.

Minikit #7 (04:04):
In the area directly after the conveyor, there is a Plastic-Man vent to head down. On the other side there is a dig spot to dig up the minikit.

Minikit #8 (04:39):
In the next area, when you head down the hole, there is a golden statue in an alcove in the cliff. Destroy it for the minikit.

Minikit #9 (04:53):
From the last minikit, head back left around the path and destroy the pile of bricks at the end. Build the loose bricks into a Lantern point and use it to bash open the plants of woods stopping you getting the minikit in the alcove on the left.

Minikit #10 (05:54):
There are five steam pipes to open, spread out across the level, in order to get the minikit:

Adam West in Peril (01:43):
At the end of the first path, before you turn right, there is a laser sealed cell with Adam in it. Min control the character inside and get him to flip the switch and shut down the lasers. Fight off the yellow Lanterns and free Adam.

Character Token #1 (02:52):
At the electrical gates, there is a magnetic value to use. This will release loose bricks which can be built into a switch to release the token from a nearby cage.

Character Token #2 (03:30):
After passing the crushing blocks and electricity gates, continue to the right to find a Brainiac block to shrink. This reveals a tech terminal for Robin and once activated the token will appear in the lava.

Character Token #3 (05:11):
Between minikit +8 and #9 you’ll find Bat-Mite at the bottom of the hole you go down. Speak to him and then fly up the hole and to the back of the area where you’ll find a ledge with an investigation point. Use a sensory character to reveal the item that Mite wants and then return to him for the token.

Red Brick (07:15):
At the very end of the level, the Plastic-Man point is easy to spot. Use it and he’ll turn into a helicopter, fly behind Sinestro, and return with the red brick.