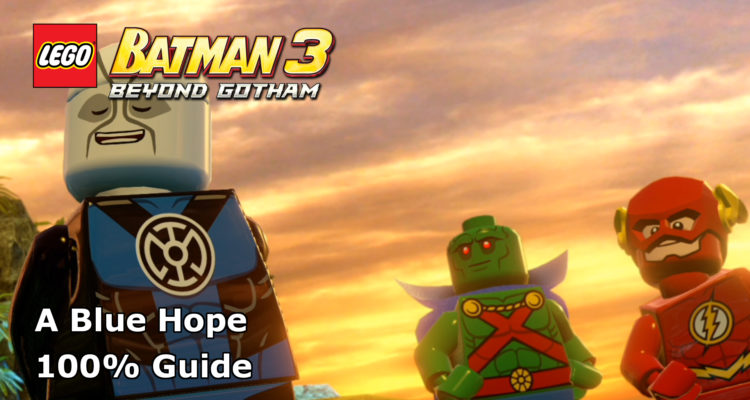 This guide will show you how to achieve 100% completion on LEGO Batman 3: Beyond Gotham Level 10, A Blue Hope.

Minikit #1 (00:16):
While circling the ship, there are five blue satellites to take down. Shoot all five for the minikit.

Minikit #2 (00:54):
As you progress through the ship based battle, look out for a metal rock towards the bottom of the screen. Destroy it with a missile for the minikit.

Minikit #3 (01:02):
At the start of the land-based level area, jump into the water to the left of the ship using a scuba character. There’s a minikit by some plants under the water.

Minikit #4 (02:14):
Fly up high above the starting point to find a cliff edge. Use Brainiac to shrink the boulder and this will draw a monster out of the small cave it’s blocking. Blow it’s silver head up, then use Robin’s light suit to light up the small cave where it sprang from. Destroy the golden dome inside to retrieve minikit.

Minikit #6 (03:22):
Charge up the light suit and then head right until you come to water. There is a dark cave at the back of this area with the minikit inside.

Minikit #7 (04:45):
When you pass the giant venus fly trap and you enter the cove to blow up the silver container. Look up and use a magnetic powered character to pull down the insects and feed them to the plant for the minikit.

Minikit #9 (06:30):
In the far right of the area, there is a Grundy dig point in a shallow pond. Use it to pull out a shower and a button to activate it. Next, activate the shower to grow a plant with a golden core. Destroy the golden part for the minikit.

Minikit #10 (08:08):
Again, in the final area, there are three birds nests to destroy. Two are close to each other on the left, and one is above the Grundy site from minikit #9.

Adam West in Peril (03:46):
About half way through the ground-based part of the level, you’ll need to drop a rock on a monster. High up on the left, you’ll see Adam West in a birds nest. Fly up near him and higher up the cliff you’ll see a rock that Brainiac can shrink. If you shrink it, a boulder will roll down, destroy the bird, and leave loose bricks for you to build a path down for Adam.

Character Token #1 (01:17):
At the beginning of the ground-based part of the level, Bat-Mite is just off to the left. Speak to him and then jump in the water to the right. In the water you’ll find a chest with a rock on it holding it down. Shoot to rock to raise the chest and then jump up and use the grappling hook to gain access to the contents. Return to Bat-Mite for the token.

Character Token #2 (07:01):
At the very end of the level, fly towards the front of the screen and then down to a secret area under the main ground. There’s a rock down there for Brainiac to shrink which reveals a drone point to retrieve the token.

Character Token #3 (07:33):
Just to the left of the last token, there is a magnetic flower. Open it up for the token.

Red Brick (05:21):
In the final part of the level, just to the left of the blue creature is a rock that Brainiac can shrink. Shrinking this will reveal the Plastic-Man point for the red brick.