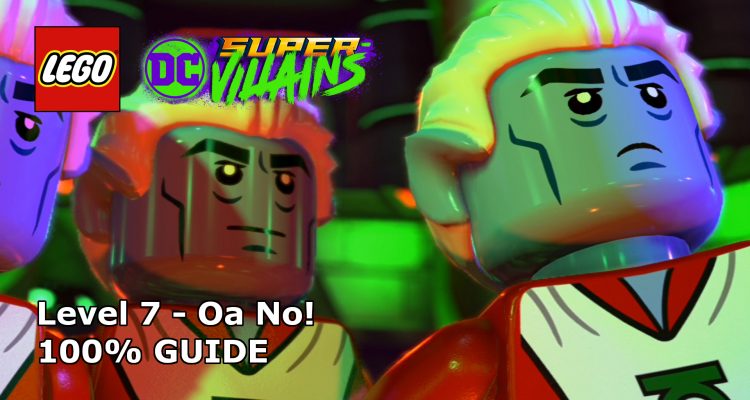 This guide will show you how to achieve 100% completion on LEGO DC Super-Villains Level 7, Oa No!.

The video will show you what is required to 100% the level with additional detail below for each part. Each level of both the core story and bonus Justice League story requires you to collect the following:

Graffiti Spot (02:03):
In the tower next to where you mind-control the lantern, the graffiti spot can be found hidden behind a console.

Character Token – Simon Baez (02:32):
When mind-control the lantern as part of the story path, before completing the puzzle, get the character to pull the lever on the left. This will activate a laser which will shoot out to a platform off to the right. Head over to that platform and build the bricks into a laser deflection point in order to charge the panel opposite and release the character token.

Red Brick – Combat Confetti (00:30):
As soon as the level begins, head to toward the screen and use detective mode to reveal a grappling hook. Pull it and a signal will be sent out to bring in another platform. Destroy the silver brick in the green goo to retrieve the red brick.

Minikit #1 (01:10):
There are four floating portraits of Green Lantern scattered around the area, the first can be found on the other side of the crash ship at the beginning on the level, the final one is on the side of the last building. These are easy to spot as you work your way through the level and once they’re all destroyed, you’ll receive the minikit.

Minikit #2 (03:46):
Up on the platform where you find the graffiti spot, there is a dig spot which will release pieces to fix the platform switch next to it. Once activated, platforms will appear on the left. Follow the path to the minikit.

Minikit #3 (04:24):
In the building where your custom character gets a new power, there is a hacking terminal. Use the terminal with a shrinking character to release the minikit next to it.

Minikit #4 (05:26):
On the final platform where you create the scare gas, there is a tracking point to the right of the steps. Follow the trail to find pieces of the lantern logo which can be put on to the statue with telekinesis.

Minikit #5 (06:13):
The final minikit can be found in the battle arena. There are two silver bricks to destroy opposite each other. Destroying these reveals two switches which need to be activated one after the other fairly quickly. The switches reveal aerobic poles around the battle arena, swinging on all them will reveal the minikit.