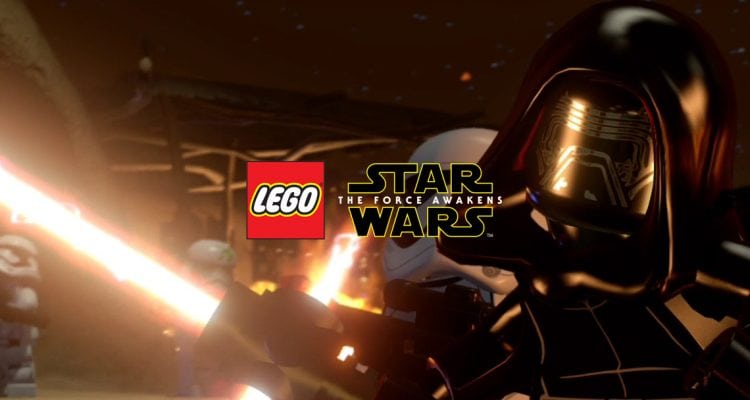 Minikit #1:
There are objects to destroy and rebuild, the first is near the start of the level, up near where the first cache of weapons is revealed. Once all three have been destroyed and rebuilt, the minikit will appear.

Red Brick:
If you head right through the village area until you come to a market stall in the top right, destroy the pile of junk in the middle of this area and then use the multi-build to build two stick men stormtroopers. Once both have been built, the red brick will appear on top of the market stall.

Minikit #2:
Three sports-related objects need to be used here. The first, to the right of the red brick there is a football goal post, destroy the junk near here to build a BB-8 panel which provides you will a ball to kick into the goal. The second is at the far left near where the first part of the last minifigure was constructed, you’ll see bowling pins to destroy. The third and final one is at the bottom left of the area. Destroy everything and use a bomb to destroy the silver bricks. This will allow you to construct a basketball hoop and a BB-8 panel. Using the panel, launch BB-8 through the hoop for the minikit.

Minikit #3:
In the elevated ammo room, right by the window are the bricks to build a minikit, smash them and put them together again to reveal the canister.

Minikit #4:
After the cover shooting segment, stay to the right-hand side of the area until you see a house in the distance with a stormtrooper shooting from the doorway. Shoot towards that house to reveal the minikit.

Minikit #5:
Once you’ve used the water tower to put out the flames, use a Force user on what remains to reveal the minikit.

Minikit #6:
Shortly after the previous minikit, you’ll come across a group of stormtroopers, take them out and then continue heading left until you find a large container next to a market stall. Destroy the container and use the bricks to build a BB-8 access panel on the site of the trooper transporter. Using this will open the ship and reveal the minikit.

Minikit #7 :
This minikit requires you to destroy three silver antenna towers. The first is at the very beginning of the second area of the level, the other two are right at the end of the area, where you take on the flamethrower.

Minikit #8:
Next to the third tower from the previous minikit, there is a large golden container, use heavy fire characters to destroy this and reveal the minikit.

Minikit #9:
Off to the left of the previous minikit, you will find an Admiral Ackbar access point, read into the water and come out inside a hut. Destroy the large container inside and use the rebellion access panel for the minikit.

Minikit #10:
To the left of the flamethrower area there is a pair of strong bars, use Chewie to pull these open and reveal the minikit.