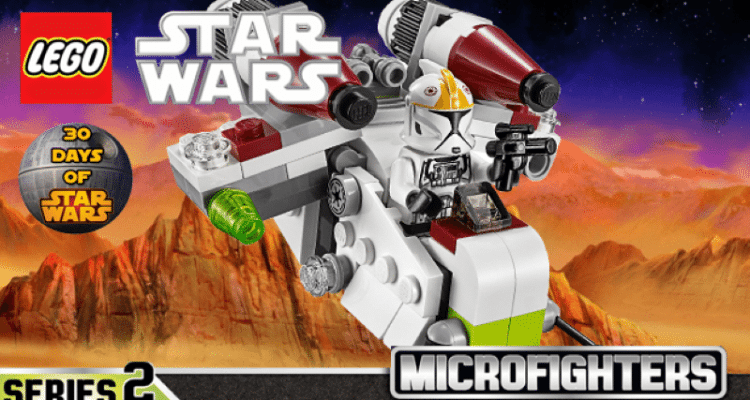 As Danielle pointed out recently during her review of the Snowspeeder, the Microfighters series have become a popular one for LEGO. Offering miniaturised versions of famous sets has given many a purchaser/collector the chance to add to their collection on a more stringent budget. And with two series already down, there is no reason to doubt that more won’t follow. Last time out I looked at the Wookiee Gunship, and today I take on a different gunship…though a little smaller.

Smaller, yes, but no less impressive. As you will read, what this set lacks in size it more than makes up for in detail – especially the minifigure – and quality. Popular in the Star Wars movies, the full-scale LEGO replica of the Republic Gunship is an impressive item, giving it’s miniaturised clone a mission to accomplish.

A constant in all LEGO sets, I think we have determined through all our reviews on the site, is the excellent detail on the minifigures. Here is no exception. Coming as close to the real thing as possible in LEGO form, the torso design looks great while we also get print on the legs, something that doesn’t always happen for whatever reason. The highlight for me here though has to be the helmet piece. The design, while looking relatively simple, compliments the minifig, and set overall, perfectly. The figure looks good in the Gunship and also comes with a standard issue gun. It is the norm for the Microfighters sets to only come with one figure, and while some aren’t a fan of this, I think for the price and the general size of the set, one minifig is fine.

But every good figure needs a good vehicle, and the Republic Gunship doesn’t disappoint. While some aren’t fans of the Microfighters’ smaller structure (but then what do they expect with a series name such as Microfighters?), if you keep in mind that these are smaller versions of the full-scale releases, then there is no disappointment here whatsoever. The first thing you notice after removing the pieces from the bag is the colours; I said this with the Wookiee Gunship, and the same applies here, it is nice to have so variety with the colours in the different sets. Here, we get some white – which compliments the figure – a little lime green and some darkened red.

As is the norm with the Micro sets, the build isn’t too complex nor takes too much time, with this particular one taking around 5-10 minutes. Again though, a reduced build time does not mean reduced quality, as this looks great when completed. One of the best features of the Microfighters series, for me, is that the vehicles are instantly recognisable. The wings, though a little thick, attach on hinges and come with missiles. A note, also, of the printed Republic insignia on the studs. No stickers here…

Looking at it from the playability angle, with kids in mind, there are no major concerns. One slight criticism is that I found the side plates could be prone to snapping off if gripped too tightly, so maybe just a warning not to get too overzealous is in order. The flick-fire missiles on either wing look good and are placed in a way that seems natural. Certain previous sets have been found guilty of placing the missiles not for authentication, but more for playability. While that maybe isn’t a bad thing, it’s a middle ground that needs to be found when it comes to marketing either a toy or a collectable item. 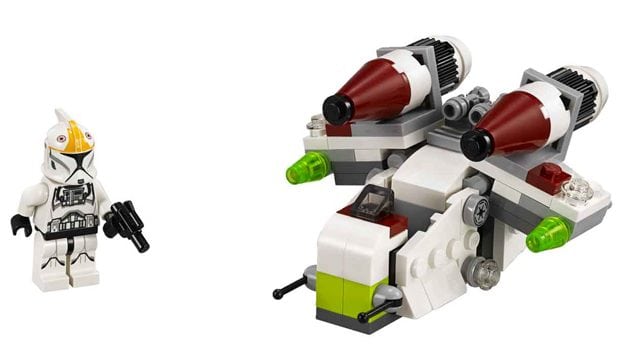 It’s hard to find too much fault with the Microfighters sets. Their purpose is to provide smaller versions of popular and previously-released large-scale builds, while also maintaining design quality on a smaller scale. Given the popularity of the LEGO Star Wars sets, and the (shall we say) critical nature on some, this is no small feat. However, on this occasion at least, the job has been done.

A good minifig addition and an impressive Gunship vehicle make this another solid set, which can act as a suitable present on a budget for those LEGO Star Wars fans in your family, or another piece in a growing collection.

Another home run for the Microfighters series. The Clone Pilot looks great and really compliments the Gunship, which itself doesn’t disappoint. Slight robustness concern aside, it won’t take long to build and offers plenty of fun for kids, making this another great LEGO set. After all, isn’t that the point?

With the entertainment world on hold for the foreseeable,

LEGO Lord Of The Rings – The Battle of Pelennor Fields...

LEGO Lord Of The Rings – The Secret Stairs 100% Guide